Note that Linux imaging tools will not work if the RAID array is a software RAID since the Windows file system will have been maintained using Windows drivers, which Clonezilla, etc will never see. If that's the case, you need a Windows based solution, like a good backup using whatever backup tool you are using. P2v from Linux source machine using software RAID (md) not supported - workarounds? (self.vmware) submitted 7 years ago by MonsieurOblong. These are OLD systems running on software RAID. I was looking at possibly using Clonezilla and it doesn't support software RAID in Linux either. Converter is a pretty well made tool for being FREE. Cloning software that supports RAIDs. A computer running some Intel onboard RAID controller had a RAID configured, and my friend wanted to clone the RAID disk so.

I recently purchased a second SSD, the same size as the first (though, different manufacturers and models). I was thinking about trying a RAID 0 config for fun. Neither of these SSD's are flagship devices, so the extra performance while increasing capacity on a 'single' drive sounds nice too. I am aware of the risks and intend to set Macrium Reflect to create a drive image once every couple days to an external 4TB hard drive, and I'll keep at minimum 2 images in case it screws up while writing one.I just have some questions:1. My motherboard is an MSI Z68A-GD65 (G3) with a 2500k (non OC, but I'm thinking it's time - I fiddled with it before and got 4.4 GHz).

It supports RAID 0/1/5/10. Does this mean it has a dedicated RAID controller, or will it be using CPU to emulate?1a.

In either case, will I notice a hit on CPU performance?2. Can I make a RAID 0 with similarly sized, but non-identical drives?3. I'd like to keep my OS install, so I was going to image my current SSD to my external drive, format both SSD's, create the RAID, and restore the image to the SSD RAID array. Is this a flawed approach?Any other tips for a noob? Ok, so I realized that clonezilla will work the same regardless of where you run it from.

So here's what I'm thinking of trying now. I flashed my Macrium Reflect image to the RAID array (after flashing it to my IDE drive and booting to that).

Windows will not boot on the RAID array, but Windows Recovery will. So I booted back into my IDE drive and I'm creating a Windows backup image right now.Things to try:1. Boot to Windows Recovery from the RAID and restore the backup image I'm making now.2. If that doesn't work, install fresh copy of Windows 7 on RAID because I know that recognizes it, upgrade to Windows 10, then restore the Windows 10 recovery I'm making now.I'm thinking #2 should work. Well I got what was coming to me.

Drive died last night and I lost the array. LOLI have a backup from a week ago which is perfect. Problem is, my image is now larger than a single drive. I'm using Macrium Reflect, which has always worked great for me in the past.

I can restore an image larger than the destination disk so long as only free space puts it over. Unfortunately, I had a working directory on there for photo/video editing that was 80GB.

I have that backed up, so I don't need to restore those files. I can mount the image with Macrium, see the files and delete them, but it reverts any changes to the image when I dismount it.I've searched for about a half an hour and can't find if it is possible to modify a Macrium image from within or outside of the program. Does anyone know a way to do this? Does the paid version allow it? Another piece of software? My backup solution is to buy a larger drive, there's a good deal on a 512GB 850 EVO right now, but I'd rather save the money if I can.Thanks in advance for the help. I'm surprised it failed in only a couple months. 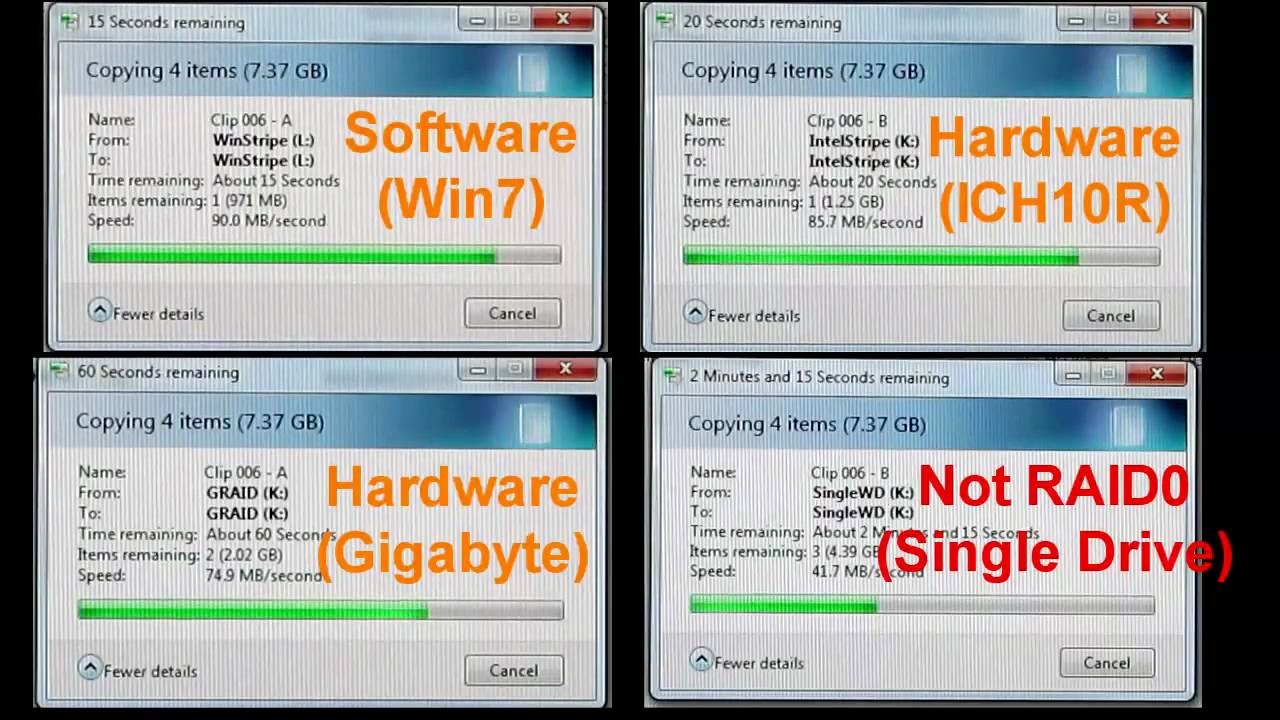 Did you secure erase and re-initialize both disk to see if a disk actually failed? Sometimes non-enterprise drives can drop from RAID.Also, may be a good time to re-evaluation your 'need' for RAID 0. Other than sequential speeds you're not gaining anything on SSD's really.

Back in the day on mechanical disk, spreading the load among more spindles helped in IO demanding applications but that shouldn't be an issue with a single SSD for a personal computer.Other than l337 benchmarks, how often do you sequentially write files that demand that speed and outweigh the risk? If you truly need this configuration, you would be better suited for RAID 10. If it's a 'need' the money shouldn't be an issue. Just a thought. Oh I never said I needed it, just wanted to try. I do a lot of photo and video editing, copying files from one drive to another and loading them into editing programs, just wanted to see how big a difference it would make (none, now in my experience), and give it a whirl to learn about it.I did have a mixture of drives in there, though they were the same size. One of them was a couple years old - Kingston KC300.

I actually RMAd a Kingston V+200 because of failure and they sent this in return. Not going to be buying any more Kingston budget drives.Anyone know specifics of image manipulation?

I'm one step away from getting everything back together again, I just need to delete this folder from the Macrium image. Ok, so the new drive is still en route, but I had some time this evening to futz with stuff.

I played around for an hour with the guts of my PC hanging out the back of the motherboard tray, trying every combination of SATA connection point and power connector. I'm still not 100% positive, but I'm fairly certain it's a bad power cable. It intermittently recognizes drives (or not at all) after the first SATA power connector on the cable (there are 4). If I connect one drive to the first, and the second drive to another connector on a different power cable, it boots.This is a Seasonic PSU that's been working flawlessly for 3 years or so. Keygen for mac.

Why would a cable connector go bad after this amount of use and without ever being touched (buried inside the case)? Really confused about that, but I suppose stranger things have happened.